Common to both of the two large oil paintings and all of a dozen mixed-media drawings that make up David Tomb‚Äôs show at Hoffman Gallery are figurative images described by a rather odd, gestural mark-making that runs the gamut from the blatantly crude to the pleasantly facile. These gestural marks all give evidence of a remarkable engaged rhythym that allows them to be read as almost a seismographic record of the artist‚Äôs internalized emotions. As a result, these pictorial constructs are animated by a kind of musicality similar to that which Wassily Kandinsky wrote about in 1910 and made visible in his paintings. 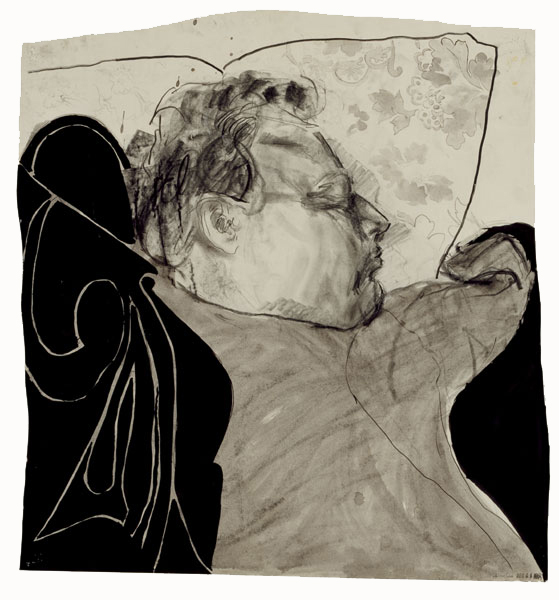 Kandinsky, however, was drawing an analogy between the abstractly kinesthetic properties of form and the structural properties of music. In Tomb‚Äôs taut, quasi-frenetic improvisations, kinesthetics give way to representation almost as if by visual accident. Lines and masses congeal into sketchy images of lumpen figures and tawdry surroundings that recall the psychologically charged work of artists such as Alice Neel, Claes Oldenberg, Lucian Freud and Leonard Baskin. As a comparison to Tomb‚Äôs work, Baskin is particularly relevant when I remember his famous series of drawings portraying the heroes of Homer‚Äôs Iliad as brutish Neanderthals, rather than in their more usual presentations as figures from classical Greek Art.

But the nature of the protagonist in Tomb‚Äôs pictorial dramas is almost opposite to that of the men of action memorialized in Homer‚Äôs poem. At first glance, I assumed that the figure repeatedly presented in these works (there is only one in each, and he is obviously the same stout-bodied individual) was a self-portrait of Tomb. Only after reading the titles of the work did I discover that this omnipresent model is ‚ÄúRichard,‚Äù who from all appearances is a man of obsessive reflection, even to the point of a disturbing exclusion of action. In the penetrating and suspicious look of his eyes, Tomb‚Äôs ‚ÄúRichard‚Äù somewhat resembles a middle-aged Orson Welles thoughtfully considering a soliloquy.

In their appearance of internalized distress and torpid disengagement from their environment, these figures all carry the burden of representing variations on the theme of a postmodern Everyman. This ‚ÄúRichard‚Äù seems fully conscious of the almost horrifying banality of his surroundings (which is suggested by the florid and sugary environments within which the figure is posed in the larger paintings) and also conscious of the lack of any real alternative to that banality. Tomb almost always gives a disturbing emphasis to the heads of these figures, both by enlarging them in relation to the rest of their bodies and by saving his most detailed articulations for his subject‚Äôs face. In fact the less the forms of other objects in the paintings resemble the shape of the figure‚Äôs head, the more generalized their description seems to become. This holds true for the various body parts depicted in most of the works just as it does for any of the other, less-animate objects. Perhaps this is a way of saying that today‚Äôs Everyman can only survive if his own internal musings serve as a last-ditch salvation from the living death of a socially prescribed consciousness.

Perhaps it is best to leave such questions moot and briefly consider something quite different–the relation of these images to the ‚Äúarcheological space‚Äù implied by collage. There is an odd disparateness in the different kinds of mark-making that Tomb incorporates in his drawings, which suggests an allusion to the juxtaposition between the schematic and the imagistic that is particularly visible in the collage works of Kurt Schwitters. Tomb‚Äôs works are not really collages, but they bring to bear the idea of multiple layers of meaning just the same, with the image of a problemistic human self as the gravitational force holding all of the other visual incidents in some kind of relationship with each other.