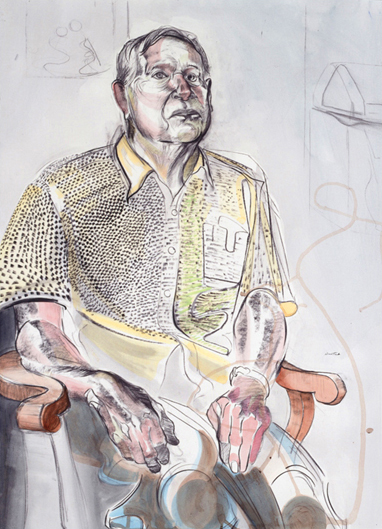 ‚ÄúFresh Flesh,‚Äù the title of a three-artist exhibition at Scott White Contemporary Art,¬Ýhas a dehumanizing ring to it, as if the show were about the body and nothing else. This isn‚Äôt actually the case, though the stated intention of the title is to refer to the connective thread between these painters: All work with the figure. They do so quite differently. New Yorker Sebastian Blanck, who displays the most interest in flesh, makes cool, formal compositions with a restrained erotic quality. His favored subject is a woman bathing, a venerable subject in art heavily popularized since the advent of the impressionists. Blanck‚Äôs style of painting also owes something to Alex Katz.

He has an eye for elegance, as in the lithe figure seen in profile in ‚ÄúIsca With Yellow Towel.‚Äù Blanck works up a pleasing interplay between the female figure and a heavily dotted shower curtain in three other paintings. It‚Äôs as if viewing her form through a screen that is alternately clear and brightly colored. The work is exceedingly tasteful, stylishly executed and in the end, barely eludes blandness.

Juan Carballo and David Tomb infuse their figures with greater life. Carballo, who lives and works in Miami, looks quite earnest in his self portrait. His face and form are heavy on brushwork, as are those of his other subjects. He has a good eye for face and mood, a confident manner with paint. ‚ÄúPaula Dreaming‚Äù is a gently atmospheric little picture. Lucien Freud seems to be an overbearing influence in some pictures, whether intentionally or sub-liminally, but as influences go that‚Äôs a wise choice.

For Tomb, based in the Bay Area, clothes matter more than flesh. That is, he loves a pattern: A bold plaid on the shirt in ‚ÄúLee,‚Äù or the wobbly lines in another shirt, in ‚ÄúDrift.‚Äù Of course, he‚Äôs interested in the figure and face too. He achieves a rakish pose in ‚ÄúPeaches,‚Äù whose subject has detailed tattoos that Tomb renders with flair. Noted Bay Area painter Frank Lobdell looks dignified in his portrait, though a touch wary. But you have to think the finished portrait pleased him.