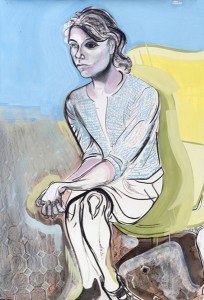 These aren‚Äôt still-life depictions, but David Tomb‚Äôs subjects don‚Äôt mind the names he affixes to their portraits. They‚Äôre also his friends. They drink coffee with Tomb, pronounced ‚ÄúTom.‚Äù They dissect the day‚Äôs news and probe life‚Äôs meanings.

Then Tomb, a well-known San Francisco portraitist whose works are on display at the Hartnell College Visual Arts Building gallery through Dec. 20 in ‚Äúthe Figure Unstudied,‚Äù reaches for his brushes.

Quickly, he paints his friends.

‚ÄúThey must be good friends, too, because even when they see the results of my work, they come back,‚Äù Tomb said. 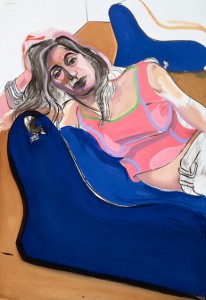 ‚ÄúOne sitting per picture. I maintain a caffeinated conversation so we‚Äôre both engaged in the process. I socialize and work at the same time.‚Äù

Tomb works in his studio, which is part of what once was a 1950s police precinct station, a building complete with holding tank, in the Mission District.

‚ÄúBrick and concrete in the Dragnet modernist style,‚Äù Tomb said of the structure.

Since his friends are often restless souls and not professional artist models, Tomb limits their sitting time. Usually, it‚Äôs one three-hour session with two hours for the head and face and one for the body.

Creating quickly helps capture a spontaneity of moment and an authenticity of character, qualities of a portrait that tend to slip away with repeated sittings, he said.

The exhibition at Hartnell shows drawings, mixed-media collages and paintings.

One reason Smith brought Tomb‚Äôs works to Hartnell was to show students how a master artist uses ‚Äúline and gesture to capture the essence of the human figure.‚Äù

Tomb grew up in the San Francisco Bay Area. As a boy, he became fascinated by art, which also ran in his blood.

His great-grandfather, for example, ran a booth along the Santa Cruz Boardwalk early in the 20th century. Great-grandfather sold souvenir landscapes that he painted on redwood bark.

‚ÄúHe was a painter and raconteur, and I still have a couple of his works,‚Äù Tomb said.

Tomb‚Äôs mother studied to be an illustrator. His brother, Bruce, is an architect who also enjoys doing art.

After a subject has stood and stretched and left his studio, Tomb may develop the portrait further. To do so, he‚Äôll turn to notes he took during the session.