"> The ‘Great Wall of America’ and the threat from within Cynicism, hypocrisy and an entirely un-American urge to exclude are the foundation of the barrier that stretches along the border with Mexico. | David Tomb 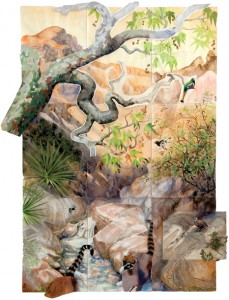 Between cynicism and hypocrisy lies the 2,000-mile U.S.- Mexico border. America is raising a wall in the desert to separate Mexican drug exporters from American drug consumers, to separate Latin American peasants who will work for low wages from the Americans who would hire them.

The Great Wall of America, straddling less than half the length of the border, descends into canyons and across the desert floor. For the Mexican, it represents a high hurdle. For the American, it is an attempt to stop the Roadrunner‚Äôs progress with an Acme Border Sealing Kit.

In some places the wall is made of tennis-court-style cyclone fencing or dark mesh of the sort used for barbeque grills in public parks. In other places the wall is a palisade of 20-foot-tall bars that make a cage of both sides. The most emphatic segments are constructed of graffiti-ready slabs of steel.

On the Mexican side, if you stand with your back to the wall, you will see the poorest neighborhoods, built right up to the line. These frayed, weedy streets have become the killing fields in an international drug war; they are more daunting than the dangers of climbing the wall.

The traditional Mexican accommodation to moral failure ‚Äî the bribed policeman ‚Äî has degenerated to lawlessness in places such as Juarez and Tijuana, where police kill federal soldiers who kill police who kill drug gangsters who kill other gangsters of the sort who did kill, apparently with impunity, at least 15 teenagers celebrating a soccer victory. Punch 911 and you get the devil.

On the American side, if you stand with your back to the wall, you will see distance, as the United States recedes from the border. There is a shopping mall with big-box stores half a mile away. There is a highway that eventually leads to suburban streets laid out in uniform blocks, and cul-de-sacs where Mexican gardeners are the only ambulatory human life.

The suburban grid belies America‚Äôs disorder. Grandma‚Äôs knockoff Louis Vuitton handbag is so full of meds it sounds like a snake rattle. Grandma shares a secret addiction with her drug-addled dude of a grandson, whose dad prowls the Home Depot parking lot in his Japanese pickup, looking to hire a couple of Mexicans to clear out some dry scrub.

In the remotest regions of northern Mexico, the terrain is so treacherous that nature itself forms the wall against America. Desperation moves migrants to attempt ever-more-treacherous terrain to achieve U.S. soil.

On patriotism-for-profit talk radio and television, the illegal immigrant is, by definition, criminal. She comes to steal the American dream. But in my understanding, the dream belongs to the desperation of the poor and always has. The goddess of liberty in New York harbor still advertises for the tired and the poor, the wretched refuse. I tell you, there is an unlucky man in the Sonoran Desert today who will die for a chance to pluck dead chickens in Georgia or change diapers in a rest home in Nevada.

Great empires expand beyond their own borders. Empires in decline build walls.

As it stands, the Great Wall of America is a fraction of the length of the Great Wall of China. China‚Äôs dragon-spined ramparts, once a wonder of isolation, are now a draw for tourists, even while China trespasses its own borders to forge the Chinese century. The dragon flies to Africa and to Latin America. While American soldiers die in Afghanistan, the Chinese venture to Kabul to negotiate mineral rights.

The nearer precedent to the American Wall may be Israel‚Äôs wall in the West Bank. More than 400 miles long, the Israeli ‚Äúbarrier‚Äù ‚Äî in some places a fence, in others a concrete mass nearly twice the height of the Berlin Wall ‚Äî was constructed, according to Israeli officials, to deter terrorists. After Sept. 11, the fear one heard in America was that agents of violence from the Middle East might easily disguise themselves as Latin American peasants and trespass into our midst.

What more obvious reason is there for a wall than protection? Any nation should police those who come and go across its borders. But in the United States, as in Israel, the wall has created a new anxiety. Once the wall is in place, anxiety about the coming outsider changes to an anxiety about who belongs within.

The question that has lately been debated in the Knesset is bluntly stated: Who is a Jew? In Israel, the answer to the question concerns religion and citizenship. But it entails further practical considerations. Israel has decided to rid itself of 400 children of illegal foreign workers (some of whom built the West Bank wall), children who were born in Israel, speak Hebrew as their mother tongue and know no other country.

The question that has lately been taken up by U.S. senators is bluntly stated: Who is an American? Republicans have proposed excising the part of the 14th Amendment that guarantees citizenship to anyone born on U.S. soil. GOP Sen. Lindsey Graham of South Carolina refers to foreign women who come to this country to ‚Äúdrop‚Äù their babies. Graham chooses diction that describes inhuman beasts of burden.

I cannot guess whether this new nativism ‚Äî though it overrules nativity ‚Äî is serious business or merely a play for reelection. The irony remains: The land of the free that the wall was built to protect ‚Äî the literal ‚Äúhomeland,‚Äù soil so infused with sacred legend it was deemed by the makers of the Constitution more important than blood in determining citizenship ‚Äî is threatened from within. And the wall that is supposed to proscribe the beginning of America becomes the place where America ends.

Richard Rodriguez is the author of many books, including ‚ÄúBrown: The Last Discovery of America.‚Äù He works for New America Media in San Francisco.