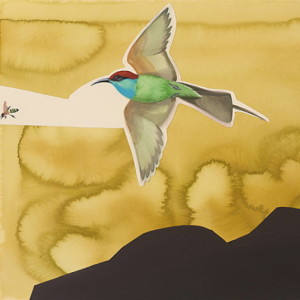 David Tomb‚Äôs two childhood loves were art and birds. As an adult, he‚Äôs brought them together ‚Äî in a way that supports international bird conservation.

Tomb ‚Äî a San Francisco painter and collage artist ‚Äî currently has a show at the San Francisco Public Library focusing on endangered birds of the Philippines, including the majestic Philippine Eagle.

It‚Äôs part of an initiative to showcase endangered species in the Third World, and raise both money and awareness to help them survive. Together with several childhood friends, Tomb runs a small nonprofit called Jeepney Projects Worldwide that so far has used art to spotlight the Tufted Jay (Mexico) and Horned Guan (Mexico-Guatemala), as well as the Philippine Eagle.

‚ÄúI‚Äôd always wanted to paint birds. As I started traveling more and getting out into the field, mostly Mexico, I thought, ‚ÄòWhat can I do to help?‚Äô‚Äù said Tomb. 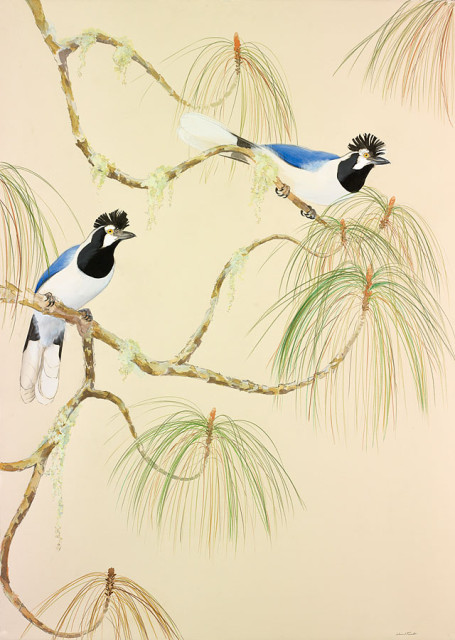 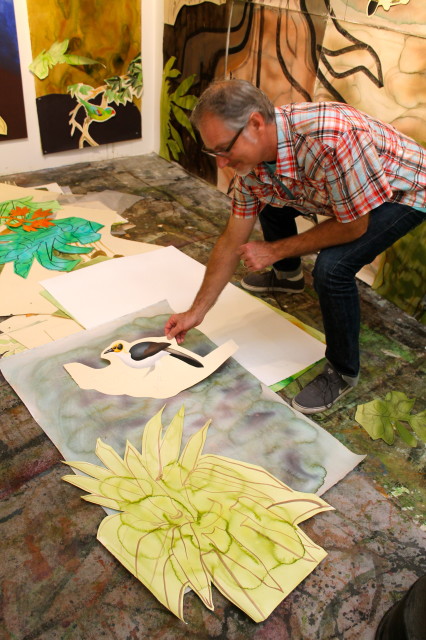 David Tomb working on a collage / Photo by Ilana DeBare

Boy Birder in Oakland and Marin

Tomb started birding as a boy in Oakland and then Marin County, where he fell under the spell of the late birding legend Rich Stallcup. He took part in his first Christmas Bird Count at age 11 in 1972.

‚ÄúRich was the M.C. compiling the numbers at the end of the night,‚Äù Tomb recalled, ‚Äúand I thought, ‚ÄòThat guy is really cool. I wish I could be like that when I grow up.‚Äô It was the first time I remember thinking an adult was cool.‚Äù 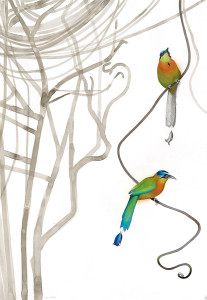 For the first twenty years of his career as an artist. Tomb focused on painting people. He aspired to paint birds, but couldn‚Äôt figure out how to forge the same personal connection he had when using live human models.¬Ý ‚ÄúI would look at photos of birds and think, ‚ÄòWhat am I going to do with that?‚Äô‚Äù he said.

Several years ago, he took the plunge. He decided to try using museum collections of bird skins as his models. But he didn‚Äôt want to simply create straightforward field guide-style images; he wanted to add something personal to the work.

So he evolved a style that combines realistic birds ‚Äî painted at their actual size ‚Äî with a more abstract background.

‚ÄúI like the tension of the two,‚Äù he said, ‚Äúthe realistic-looking bird with the flat cut-out form. It can add interest for the viewer that draws them into the content. It adds to the art experience.‚Äù

Tomb has done sketches, paintings and prints of birds, but the SF Public Library exhibit focuses on collage works. Tomb starts by doing numerous bird sketches from museum skins. Then he rubs the back of the sketch onto white paper with the back of a spoon. He redraws the image about ten times, experimenting with poses and positions ¬Ý‚Äì ‚Äúkind of Frankensteining and willing that image to look more and more alive,‚Äù he said.

Only then does he go online to compare his image with photos of the bird. Once he‚Äôs satisfied, he paints the bird and cuts it out. He also paints and cuts out elements of background foliage or terrain. Then he pieces it all together with pins, moving pieces around like a giant jigsaw puzzle. Some of the pieces are left semi-attached and dangling. 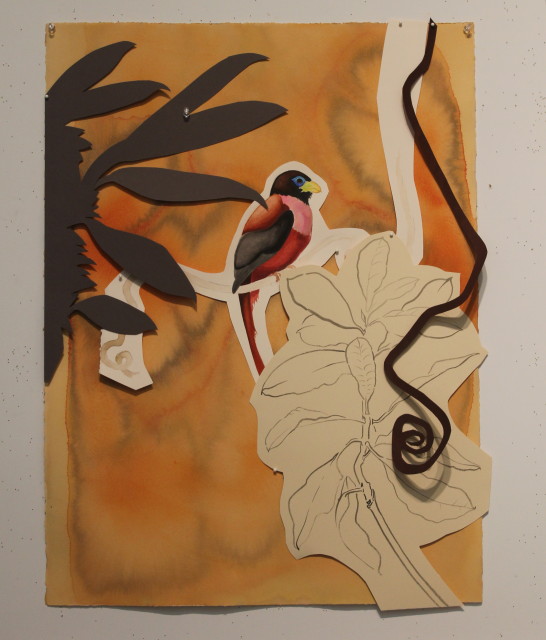 Collage in progress of Philippine Trogon by David Tomb

As he traveled to learn about and paint birds, Tomb was inspired to help protect them. His first project was a benefit for¬ÝEl Triunfo Reserve¬Ýin Mexico, home to the Horned Guan. Tomb created prints of the guan and the Resplendant Quetzal and donated the proceeds to the reserve.

His friends suggested creating a formal group ‚Äì which became Jeepney (named after the World War II military vehicles that were recycled into colorful public transit in the Philippines). ‚ÄúWe are a tiny group with a big name,‚Äù Tomb joked. Tiny or not, they have raised about $3,000 for the¬ÝPhilippine Eagle Foundation¬Ýand a similar amount for El Triunfo.

‚ÄúThe Philippine Eagle is the tallest eagle in the world, but there may be as few as 180 to 500 individuals left,‚Äù Tomb said. ‚ÄúThe biggest problem is deforestation on a mass scale. The Philippines is down to three percent of its intact original primary forest. They chopped down the trees and replaced them with bananas or palm plantations‚Ä¶. ¬ÝBut it‚Äôs not just a problem for the Philippines to solve. We in the U.S. created the demand for hardwood like Philippine mahogany in the 50s and 60s. This is a western, world problem.‚Äù 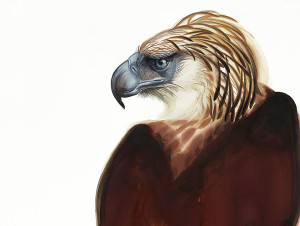 Picathartes right now dominate Tomb‚Äôs studio in San Francisco‚Äôs Mission district. One entire wall is covered with a giant collage, leaves and vines of the Ghana rain forest pinned up as high as the ceiling. Varied images of picathartes dot the opposite wall, while arm-wide paintings of vines and foliage lie on the floor, tables, chairs. 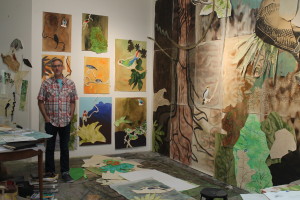 David Tomb in his studio / Photo by Ilana DeBare 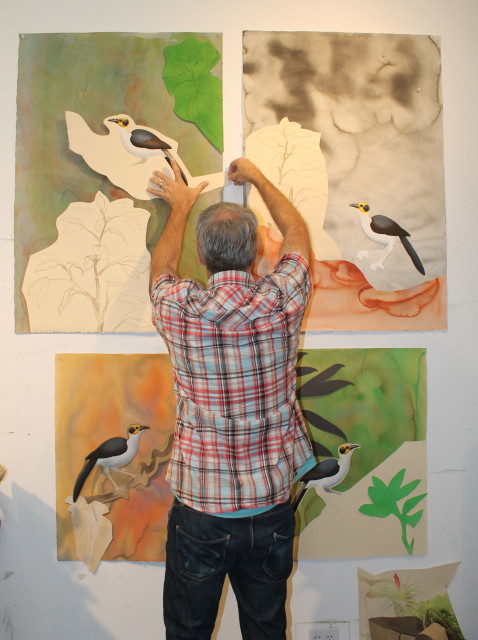 Almost as fascinating as Tomb‚Äôs work-in-progress is the place where he does his work ‚Äî a former police precinct station near 24th Street.

Tomb bought the property fifteen years ago when the city was consolidating its police facilities. At the time, it had an extra-thick concrete parking lot for squad cars and not a single stalk of vegetation. But today, when you enter through the nondescript gate, you feel like you‚Äôve stumbled upon a secret garden of Eden. A California Sycamore ‚Äî planted by drilling a hole through the concrete ‚Äî spreads its shady canopy over the compound. Grape vines twine their way behind raised beds of California native plants.

Tomb‚Äôs family, his brother‚Äôs family and his studio occupy the former police buildings. Renovated to look more like a SoMa loft space than a jail cell or locker room, Tomb‚Äôs home is lined with his bird sketches and paintings. 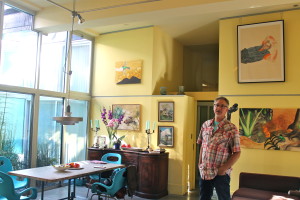 But there are even more birds outside than inside.

The landscaping ‚Äî all done without removing the thick concrete ‚Äî draws nesting Mourning Doves each year. It regularly gets Anna‚Äôs Hummingbirds, California Towhees, Townsend‚Äôs and Yellow-rumped Warblers, and flocks of Bushtits. One highlight last year was a McGillivray‚Äôs Warbler on the same day as a Red-breasted Nuthhatch.

‚ÄúWe have a pretty good yard list here in the middle of the Mission,‚Äù Tomb said. ‚ÄúAnd seeing a flock of Bushtits? That can change a regular dreary day and make your spirits soar.‚Äù 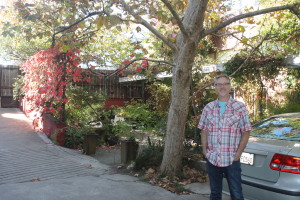 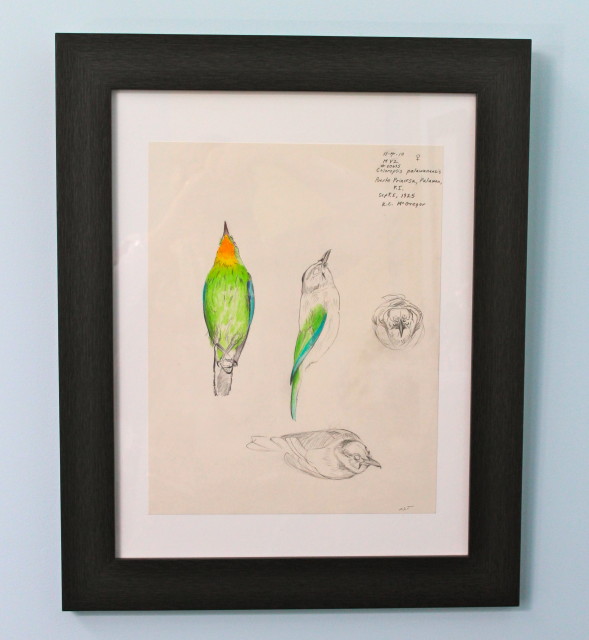 Initial sketch of a bird skin, on wall of David Tomb’s bedroom

You can view more of David Tomb‚Äôs work at¬Ýdavidtomb.com, or¬Ýlearn about Jeepney Projects Worldwide and its conservation initiatives at¬Ýjeepneyprojects.org. The Jeepney site includes an online store where you can purchase prints or note cards to benefit Jeepney‚Äôs international conservation partners. David Tomb‚Äôs exhibition at the SF Public Library is free and open daily through March 2014: Click¬Ýhere¬Ýfor details.