At the Baylands, on campus and in galleries, avian art is taking wing this winter. What makes birds — those feathered, flighty creatures — such appealing subjects?

“Birds are simply a beautiful expression of the natural world. They are one of the most accessible wild creatures to experience and connect with. If that’s not enough, they can fly! Oh, and they are descended from dinosaurs. Truly awesome,” said artist and self-described “bird nerd” David Tomb. 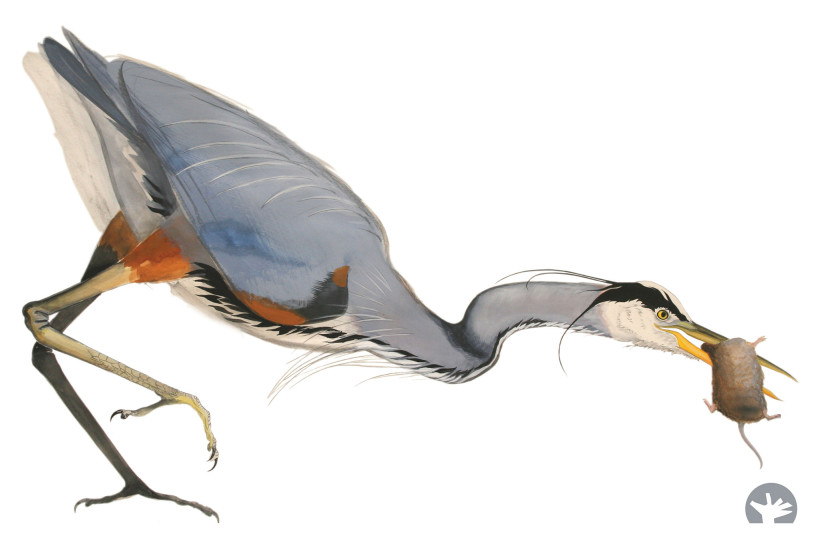 David Tomb will lead nature walks and bird-drawing workshops at the Baylands, home to many species, including great blue herons. Image courtesy of David Tomb.

This month, as part of the Creative Ecology project (a partnership between the Palo Alto Art Center and the Junior Museum & Zoo supporting work that blends art and science), Tomb will lead a free series of activities for the public at the Baylands. Participants in the five drop-in events can accompany Tomb on nature walks, practice drawing birds, contribute to a three-dimensional community diorama, and visit several learning stations, rain or shine. Art and reference material will be provided. And while it’s not required, if you have binoculars, Tomb said, “bring ‘em on down.”

Tomb said he was “stoked” to have been chosen to share his two passions with the public.

“Watching birds and making art should be super fun,” he said.

His enthusiasm for ornithology is apparent. He has a particular fondness for the Philippine eagle.

“They are chocolate brown with Frank Sinatra-colored eyes and have a stylish, massive crest of feathers on their heads that can hang down like a lion’s mane or go totally vertical,” he said of the critically endangered species. “This bird inspired friends and I to start a conservation group,” Jeepney Projects. The group partners with conservation groups to raise funds in support of endangered birds through art exhibits and sales of prints.

While there won’t be any Philippine eagles present at the Baylands, there will be a special appearance by Sequoia, the Junior Museum & Zoo’s own bald eagle.

Tomb has been an avid birder since childhood, when he’d watch turkey vultures roost in a dead oak tree in his back yard.

“This back-lit scene had a very cool ‘goth’ appeal. My parents tell me that I stared at them every morning as a toddler,” he said.

“I’m really into vultures right now, both due to their scavenging nature and the way they stretch out their wings to bask in the sun while perched — absolutely gorgeous, if a bit ominous,” she said.

“They live in Santa Clara County but are a species of special concern due to their dwindling habitat. Besides being ridiculously adorable and living in the ground, they also seem to be immune to the plague, which I find endearing,” she said.

According to Foster, birds have attracted attention and inspired human art throughout recorded history and continue to do so. Birds have often played a role in superstitions, she said, such as the belief that sparrows carry the souls of the dead, or the presence of human-avian hybrids in mythology and pop culture, from Hindu legends to Big Bird and the Harry Potter novels. She and Andrea Antonaccio co-curated a new exhibit, “Bird in the Hand,” to accompany Tomb’s Creative Ecology residency.

“Bird in the Hand” will feature the bird-themed work of more than 40 contemporary artists, including a painting by Robert Minervini that portrays the ghosts of birds currently listed as threatened or endangered and a peacock by Laurel Roth Hope constructed partly out of nail polish, barrettes and false eyelashes.

“All the work in this exhibition is evidence of contemporary art’s ongoing romance with avian species, and I hope some of that romance rubs off on our viewers, if it hasn’t already in their everyday lives,” Foster said. “This show is also meant to be a small window into the artists’ soul,” she said. “The struggle is to capture and possess the magic that comes to birds so naturally.”

“Bird in the Hand,” which will run from Jan. 16 to April 10, will have an opening celebration on Friday, Jan. 22, with food, hands-on art activities, and more photo opportunities with the Junior Museum & Zoo’s resident bird ambassadors.

After Tomb’s Baylands series is complete, he’ll create new work in the Art Center’s Glass Gallery, eventually exhibiting it alongside “Bird in the Hand.”

Meanwhile at Stanford, an exhibit called “Art at Exits” has been quietly displayed throughout campus since 2014. The exhibit pairs 10 prints of John James Audubon’s famous avian paintings — those depicting species that are found locally, such as the California quail and the red-winged blackbird with captions offering scientific information on the birds. They’re placed strategically at the exits of buildings near the particular birds’ habitats, with the hope that passersby will see the art and then become aware of the real birds just outside.

Curator Darryl Wheye has been observing and championing the birds on Stanford University’s campus since the 1990s, co-authoring a bird book with noted Stanford biologist Paul Ehrlich in the 1980s.

“It’s disconcerting to realize how little aware we are of the avian diversity around us. Science Art can help make it easier to notice,” she said. Ultimately, she’d like to bring the exhibit to other locations — major Silicon Valley companies, perhaps to raise awareness of local birds and their vanishing habitats. Some of the Audubon prints are easily visible to the public, such as at the Tressider union, while others are more hidden. Viewers can look online for a complete catalog. A new addition to the exhibit is truly “for the birds,” in the best way possible. A hummingbird garden was recently planted outside Green Library, where an Anna’s hummingbird painting is featured. Viewers can see the painting, then look right out the window or step up to the garden to witness the real thing. Wheye, who is especially partial to red-shouldered hawks, saw hummingbirds and others at the garden’s opening in November.

No matter which species or habitat you fancy, Tomb’s advice for would-be bird artists is simple: “Firstly, get out and enjoy and connect with Mother Nature. Nothing is better than first-hand experience in the field.”

What: Creative Ecology activities with David Tomb, “Bird in the Hand” and “Art at Exits”